The Picture of Dorian Gray -- I think that I enjoyed the movie more! 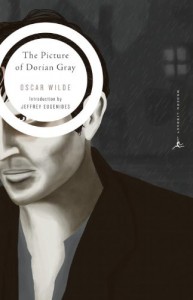 Now this was an odd- ball.

First I would like to say that, for me, books written in the 1800s are quite "difficult" to get through. To me the language and style is too drawn out and I always feel like yelling to the author "Dude, get to the point!". The Picture of Dorian Grey was no different to me. This is not due to the fault of Oscar Wilde, that's just how a lot of writing just was back then. Literature from the 1800 is usually just not "me".

I was very much in doubt if I should give this book 3 or 4 stars. In the end I opted for 3 stars because I actually like and enjoyed the concept behind the book: the eternal youth and the corruption that in the end eats up Dorian, partly due to the influence of his friend Lord Henry, and partly due to Dorians own obsession with beauty - his own and in others. It's not a surprise why this has become a classic.

I must say that I was always looking forward to the Lord Henry's scenes. I  love reading his (sarcastic?) comments and observations! And in fact I found Dorian himself quite uninteresting! :-)

In the end I have to admit that I preferred the movie by far, which was probably because it actually deviated quite a lot from the book.