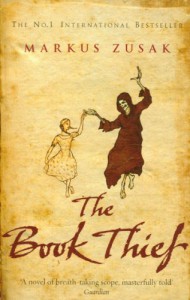 Markus Zusak, you are a sadist, making people cry like this. How dare you? You bastard!

Seriously though, this book was a surprising read in more than one way. It is a bitter-sweet coming-of-age story about a young girl growing up in WW2 Germany, as seen through the eyes of Death. Yes, you read correctly, Death. I won't tell you more than this about the story line of this book, for I think that you owe it to yourself to read it, and frankly, is there anything more tedious than book reviews that are nothing more than book summaries? I think so, but I digress. Don't let my words deceive you and lead you to believe that this is a macabre book, just because Death plays a large role in it - for strictly speaking who could Death just be an insignificant player, for when you think about it, more than 6 million people died during the years of WW2. Death surely was busy. This book is far from macabre. It is a celebration of life and some of the many wonderful things that makes life worth living, such as love, friendship and yes, reading too, even as seen through the sudden mist of misery that can expectantly engulf and affect us all.

The angle that I liked the most about this book, is how it humanised the Germans, unlike so many other novels that deal with this time in history. That was more than refreshing. It was genuinely nice not to see the Germans portrait as the bad guys.

A final thought: I do hope that this movie will make it to the big screen as a German production with a German cast and spoken language. Ich liebe die deutsche Sprache!