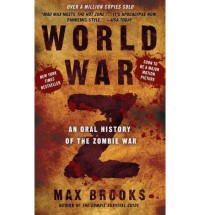 I've never been the biggest zombie-fan, and until I picked this book up, I have never read any zombie novel before. I've seen my fair share of zombie movies over the years, and with the recent heyday and revival, largely thanks to the excellent movies and TV series such as Fido, The Walking Dead, Shaun of the Dead, Dawn of the Dead (remake), 28 Days Later etc. of the past decade, have made me extremely curious about reading this book.

This book was definitely a positive surprise to me and a lot better than I expected it to be. I didn't know what to expect of it, and it's also a bit difficult to articulate and structure what I thought of it, which in part may be due to the fragmented format and style that the book was written in. I read this book more like a collection of short stories connected by a common theme, rather than one unified novel.

What I have enjoyed:
- how current-day events are tied-in to the zombie apocalypse, such as the current economic recession and the rise of the Asian economies (with the unfortunate consequence of organ trading when the organs are infected).
- the epistolary/journalistic narrative style. I think that was a good call of Max Brooks to write it like that, as an attempt to collect a sort of "collective memory" from the survivors of the zombie apocalypse. It gives the book a feeling of being "real history" that is being told by the real people who lived through such fantastical events.
- even though the book is packed with militaristic acronyms (which at times was a bit dull to me), it shows a lot of humanity through the eyes of the survivors and how they tell their tales, as an example the recollections of Darnell Hackworth, who ran a retirement sanctuary for the four-legged veterans of the zombie war.
- the description of the initial outbreak, when nobody knew anything of what was going on, the blame and finger pointing that followed and the aftermath of the war, has been described in ways that I haven't really seen before in the zombie-genre. I will not plaster this review with example, after all, I don't want to spoil the book for you!

All this kept the book fresh and relatively quick to read and is definitely worth giving a chance.